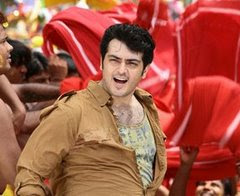 Professionally we do our jobs competitively but has no personal enmity between us, and take this as granted that actor Vijay is my best friend, says Ajith in an interview to the filmschannels.blogspot.com

Are you the next Super Star of the South?
Rajinikanth is my roll model and I consider him he is the only Super Star.

How did you get the idea to remake the Billa film?
I had that idea three years ago. I talked about this with three producers. But no one came forward to remake the film. I must be thankful to Sharukh Khan who had acted in the remake of the Amitabh's Don film. It is only after, the producers here began to remake old films.

Did you meet Rajinikanth before the film is remade?

Yes I met him and talked about my idea of the remake. He also gave his acceptance and it is only after his permission, I started to act in the film. I am very thankful to the Super Star.

Do you expect with the remake films will flourish the Tamil film industry?

It is a good question, but I am not a competitive person to answer, but the directors will be able to answer this question. I am just an actor. I just act before the camera as per the directors' instructions. Though, it is a fact, I want to say that in S.J.Surya's film New, Thottal Poo Malarum old song was remixed. It is one of the reasons for the film's success. When old songs are remixed, why not the stories of the old films in a new bottle could be taken?

Will you act with Vijay?

We have earlier acted in Rajavin Paarviyley. We are not enemies, but we have competiton professionally. If both of us act separately, it would give a lot of job opportunities to a lot of people who depend on the film industry. If there is going to be a story like Sholay, we could think about it.

Do you have any idea to do films for awards?

I am going to act for the Ayengaran productions under Raju Sundaram's direction.

What do you want to say to your fans?

When I gave good films as well as bad films, my fans were a source of encouragement for me. Without fans there are no openings in films. I appeal all to my fans, to earn money in a proper way when the age and health permit them..

About participating in car races in the near future?

Now I watch car races in TV, no idea of participating in it.

What is your pray to God?

Shalini and her to be born new baby must be healthy and happy. That is the only wish I pray for always.
Posted by N.THYAGARAJAN at 9:33 PM No comments: 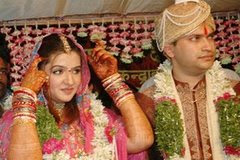 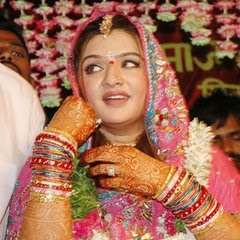 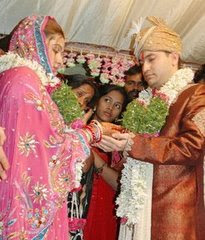 Arti, who was born in New Jersey, married Ujwal Kumar at an Arya Samaj temple in Secunderabad. Kumar works with an American bank in New Jersey.

Family members of the bride and groom were present at the simple ceremony but film industry people were conspicuously absent.

She began her film career with a Hindi film in 2001 and has worked with all top Telugu actors. She has a number of hit films to her credit.

Her debut Telugu film Nuvvu Naaku Nachav created a sensation and rang the box office. She took a break after Nenunnanu and went back to New Jersey.

Arti had attempted suicide in 2005 by drinking bathroom cleaning liquid following rumours of a linkup with fellow actor Tarun. Her younger sister Adithi is also an actress in the Telugu film industry.
Posted by N.THYAGARAJAN at 11:32 PM No comments: