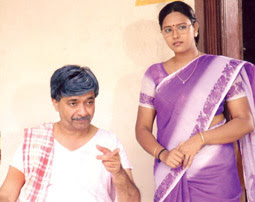 Narmada, a leading actress in more than 20 soaps in Tamil and a dozen of serial in Telugu was surprised when she received an invitation from the Shivaji Productions to act in Thavam being aired in Kalaignar TV Channel. She says, "I am acting as the eldest daughter in a family having two younger sisters. It is a sensible character and I am proud to do the role. I am doing the role in Thavam with penance, that I should bring laurels and names for my role. I also feel proud to act with the leading actor Y.Gee Mahendran in the serial".
Posted by N.THYAGARAJAN at 6:39 PM No comments:

A CHANNEL FOR HINDU RELIGION 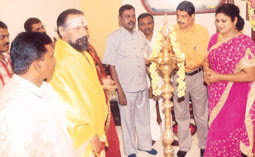 A new Channel is coming up as Indu Channel from April Tamil New Year's Day. It is a channel purely about the programmes on the culture and customs pertaining to Hindu religions. Recently, a function on the launching of the channel took place presided over by C.Neela Siva Linga Swamy. The channel was inaugurated by DIG Arumugam. The other participants are Shri Kasi Viswanatha Swamigal and the MD Ravindran.
Posted by N.THYAGARAJAN at 6:34 PM No comments: 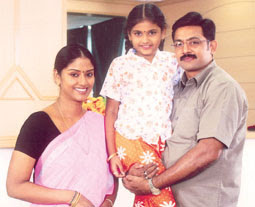 Sri Devi a new mega serial with different story about mother-in-law and daughter-in-law who function unitedly whatever they do. They adjust themselves according to the prevailing conditions of the situation. In the serial Sulakshana appear as the mother-in-law and Easwari as the daughter-in-law. The serial is produced by Ravi. The serial is aired on all Mondays to Fridays between 7.30 PM and 8 PM. Story is by Latha Nethaji. The serial is directed by B.Nithyanandam. Recently Nithyanandam has come out of the REKHA IPS of the Kalaignar TV Channel.
Posted by N.THYAGARAJAN at 6:29 PM No comments:

The Divine Media which has become popular through its Kana Kaanum Kaalangal and Kadhalikka Neramillai in Vijay TV Channel is entering with a new soap Kaloori Kalam for the Sun TV Channel. The actors and actresses are new faces are from various colleges with some leading artistes. It is a story about the happenings of a thing in a college picturised, perhaps all the episodes will bring a real story that took in the real life of students. The story and dialogues are by Brahma who has penned earlier for Kana Kaanum Kalangal and Kadhalikka Neramillai. M.Naresh, Jain and Shankar are producers and its subamuhurat took recently at the AVM Studios. It is likely the serial will be aired from January next year.
Posted by N.THYAGARAJAN at 6:20 PM No comments:

In Arul Neram programme of the Jaya TV Channel on all days in the mornings between 6 AM and 6.30 AM, the Azhwars and Nayanmars Thiruppavai and Thiruvembai are sung by school students. More than 80 students who participate in the singing chrous will be followed by discourse on Thiruppavai by Srimad Andavan Swamigal, Ahibila Mutt Srimad Azhagiya Singer and Vanamamalai Jeer Swamigal. Sri Kavi who is creative behind the programme.
Posted by N.THYAGARAJAN at 6:14 PM No comments:

Kalaignar TV Channel's Gana Kuil Pattu is heading for its semi finals on this coming Saturday to be telecast between 9 PM and 10 PM. The judges of the programme Music Director Deva and Gana Ulaganathan recently announced the semi final winners. Gana Kulathur Thulasidasan was selected during the last week as the semi finalists. In order to celebrate for winning in the semi-final Gana Ulaganathan sang two songs written by the winner. He sang Vaarariah Vaararu ..Numma Karuppusamy Vaararu and Mooku udachaverey Iyyanare.
Posted by N.THYAGARAJAN at 6:06 PM No comments: