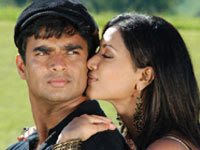 Guru En Aalu's shooting is progressing at a rapid pace and is almost at the point of completion. This film is being produced by K.R.G under the banner K.R.G Movies International. This film which has Madhavan in the lead is being directed by Selva. The triangular love story has been narrated in a novel way keeping the youths in mind. Guru (Madhavan) is in love with Seema (Mamtha) but Seema is in love with Guru's boss Krishna (Abbas). At this stage Seema's birthday comes. Krishna, who is not able to attend her birthday function, sends his gifts like cake, chocolates and bouquets through Guru. Guru hands over these gifts to Seema. Seema receives these gifts happily from Guru. Seeing the reaction in Seema's face while receiving these gifts, Guru feels that she is under the impression that he has given these gifts. In continuation of this Guru fantasizes and sings a duet Vaanam Sollum Vazthukal with Seema in Switzerland. This sequence was recently shot in Switzerland.

This film will be a hilarious laced with romance right from the beginning. Apart from Madhavan and Mamta Mohandas, Abbas is also acting in an important role. Brinda Parek will be pairing with Abbas. Vivek, M.S.Baskar, Manobala, Mayilsami, Patimandram Raja, Sona, Renuka, Aarthi and Poovilangu Mohan are also in the cast. Srikanth Deva has composed the music for the lyrics penned by Palani Bharathi, Kabilan and Pa Vijay.

The dialogues have been written by L.Venkatesan. U.K.Senthil Kumar handles the camera while V.T.Vijayan is in charge of the editing. The art is handled by Sivayadav. Sridhar, Kalyan and Iswar Babu are the choreographers of this film. Thalapathy Dinesh is in charge of the stunts. The screenplay and direction of Guru Nam Aalu is by Selva.
Posted by N.THYAGARAJAN at 11:46 PM No comments: 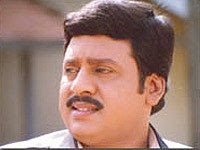 Ramarajan who had given hit film like Karakattakaran and Enga Ooru Pattukkaran stopped acting in films and entered into politics. Now he has made a comeback with the maiden project Medhai. Many of the actresses have refused to pair with him. At this stage Jyotirmayi had given a helping hand. She will be pairing with him.
Posted by N.THYAGARAJAN at 11:42 PM No comments: 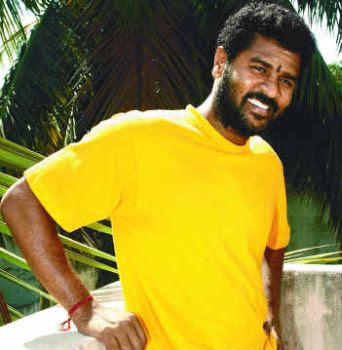 In Tamil Film Industry tamil Michael Jackson the one and one actor-choreographer-director Prabhu Deva will be taking part in a reality show ungalil yaar Adutha Prabhudeva.It is a competition dance programme for the age group from 18 to 30 years. The participants should be aware of the competition and show all their talents and abilities and market themselves.Both male and female will be the participants and from that 23 have qualified from the first level of auditions in Trichy. More than 500 people participated in the event which was judged by choreographers Sridhar and Gautham. Madurai,Coimbatore and Chennai are the other places where auditions will be held.

Prabhu Deva said 'Anyone who thinks he can dance is welcome. The rewards are attractive the winner will get Rs 10 lakhs and an international tour will be arranged. Above all one can realise their dancing talents'.

The show will be telecast on Thursdays and fridays from August 14th in Vijay Tv.
Posted by N.THYAGARAJAN at 11:09 PM 1 comment:

KALYANI DOES NOT WORRY ABOUT FILM CHANCES 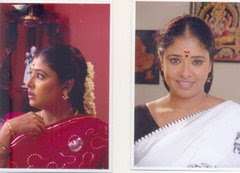 ( BY N.THYAGARAJAN )
Kalyani has no regrets for not acting in films. The young artiste, who hails from Dollar Colony in Bangalore, belonged to Telugu speaking family. She discontinued her studies from Bangalore St.Joseph College, for the simple reason that she was offered to act in Kannada Tele film 'Sorry' .The next offer came to her was the heroine for Maanaviathey a Kannada serial for the DD 1.
Now Kalayani is acting for Shivaji Productions mega serial Thavam and Bharathi yet another serial of the Kalaignar TV directed by Trinity Ravi.
Her role in the Thavam is that she acts as one of the three daughters of comedian Y.G.Mahendran . In the serial she has been asked to marry a person with whom she is not interested "The director Kathir has given me the role and I could easily bring out tears from the viewers with my pathos scenes" challenges Kalayani.
Speaking in Tamil is not her problems, because she learnt it from her mother who belonged to the Tamil Nadu and settled in Bangalore twenty five years ago in Bangalore with her business husband.
Kalyani's first serial in Tamil was Thedal for the Star Vijay Channel TV and Minbimbangal's Viswaroopam for the Raj TV channel. However, she was not satisfied with those roles, though they brought her certain amount of recognition from the Tamil audiences. She was waiting for an opportunity and it clicked through the Shivaji Productions Thavam and Bharathi director Trinity Ravi.
Kalyani who has taken a flat in Chennai for rent lives alone. Her maid servant takes care of her kitchen and shooting call-sheet dates is also accompanying her wherever she goes.
"If there is no shooting for me, I will go back to Dollar Colony and will stay for few days with my parents and brother and will comeback a day before the shooting" says Kalyani who likes to be always a free bird.
"Payment wise I am happy with the tamil serial producers. If I want earn more, I could do so by acting in films. But, the film producers themselves decide about my acting in films after watching my serials. If they are not willing to offer me a chance, I have no regrets. I treat the acting for small-screen and big-screen is same. I don't want to go to these film producers and beg for chances" says Kalyani stubbornly.
Being more philosophical in her speech she says, "If you want to attain something in your life, you will have to forego something. Otherwise, you can't reach the desired goals in your life. I forewent my higher education, for which I have no regrets".
Kalyani says that she always wanted to do performance oriented roles. "I love to do it. If the character is anything below my caliber definitely I will reject them" authentically states Kalyani.
When asked about how she learnt acting she quipped that when the first shot for the tele film was taken, she did not know even where the camera was placed.. " Just I followed what the director has said in the shooting. I owe my credit to all those directors whom I consider them are great including Kathir and Trinity Ravi for giving me chance to act in their serials" thankfully acknowledges Kalyani.
"I feel that one must be fortunate to act in serials and earn good name. I think I have done some good deeds in my past life. Otherwise, why I was called when I was at home to act in the Sorry Tele-film?. I was called to act because an artiste who has to appear didn't turn up for the shooting. Someone nearby my house suggested that I looked good and sent the producers to my house. My parents were against my acting, but after sometime they gave me permission to act in the film" talks extrovertly Kalyani.
Besides Kannada and Tamil Kalyani had acted in some Telugu serials like Endamaavalu and Sthree Naisam for the ETV channel.
Kalyani won the Silicon Valley Award for her Kabuludhari serial produced by Balaji Telefilms for Udaya TV..
"I have accepted the offer in Tamil serials only after I have completed and eight-episode-serial Chathuranga for the Kannada Udhaya TV. I was also longing for to act in Tamil Channels' mega serials. My dream has come true now and slowly people here began to recognize me. But, if anyone had seen me in Thavam, he would appreciate my acting" says Kalyani.
Posted by N.THYAGARAJAN at 1:24 AM No comments: