Tamil Nadu Chief Minister M Karunanidhi today said district Collectors and Police officials were directed to take action against those trying to stop screening of the Sun Pictures’ Kadhalil Vizhunden in Madurai and its surrounding areas.
Reacting to Marans charge, Karunanidhi, replying to a set of questions, denied that neither theatre owners nor the distributors of Ramanathapuram and Madurai were threatened.
"If Sun Pictures has any proof or evidence to show that the theatre owners were threatened, it should hand it over to authorities concerned for taking swift action" he said.
"Instead of just faxing a complaint to Home Secretary and saying that no action had been taken, Sun Pictures should file a direct complaint with Police and the Collector and submit the necessary evidence to substantiate their charge",he said.
Alleging that Sun Pictures was trying to gain political mileage and to win the sympathy from the film world, he said "their charge that the government was not taking any action against the complaint is aimed at not solving the issue".
He said no complaint was received from theatre owners and film distributors in Madurai that they were threatened. They also didn't seek police protection.” Even if a complaint is lodged now,government will not remain a mute spectator','he said Sun Pictures had criticized the clarification issued by the government. The government stopped with just issuing a statement saying nobody had the right to stop the release of a movie, it said in a release yesterday.
On Sun Pictures contention that the government had not given a firm commitment to theatre owners on providing security to screen the film, Karunanidhi said the government had clarified yesterday that any film which was certified and cleared by the Censor Board has the right to be released. "This itself conveys the message that government officials would extend all their support in screening the film" he said.
The Chief Minister also hit out at some political parties who raised their voice in support of Sun Pictures after maintaining silence when Sun TV "failed" to cooperate with the government in sharing its feed to Arasu Cable TV Corporation which is launched by the State Government.
"As per the rules all the satellite TV Channels should extend support to the Arasu Cable TV Corporation.But the government's appeal in this regard was ignored by some private satellite TV Channels" he said.
Following reports of stalling of the movie's release in Madurai allegedly by DMK activists yesterday, the government had said nobody had the right to stop a movie's release, after it had satisfied required legal mandates such as obtaining (Censor Board) certification.
Some media reports had said that the movie was not released in Madurai, a stronghold of Chief Minister M Karunanidhi's son M K Azhagiri, due to alleged threats from DMK men who warned the theatres against screening the movie.
Posted by N.THYAGARAJAN at 6:40 PM No comments:

The maiden venture of Sun Group’s new arm Sun Pictures, Kathalil Vizhunden (falling in love), has finally been released in the southern districts of Tamil Nadu, after a delay that once seemed indefinite due to pressure from M K Azhagiri, son of Chief Minister M Karunanidhi.
The romantic flick, according to the producers, was ‘banned’ from being released in Madurai, Ramanathapuram, Dindigul, Theni and Sivaganga districts. It is said that the rivalry between Azhagiri and the Maran brothers - Kalanidhi and Dayanidhi - who head the Sun Group.
Theatre owners had abandoned their plans of releasing the film last Friday after being allegedly threatened by DMK cadres. The exhibitors claimed that they did not want to be caught in between the two warring groups.
Sun Pictures had faxed a letter to the Home Secretary requesting police protection for theatres screening the movie. The group also telecast clippings through its Sun TV and Sun News channels and published reports in its Dinakaran and Tamil Murasu, explaining the difficulties faced in releasing the movie in Madurai and other southern districts where Azhagiri is said to reign supreme
Posted by N.THYAGARAJAN at 6:36 PM No comments:

RELATIONS SOUR BETWEEN MARAN AND DMK 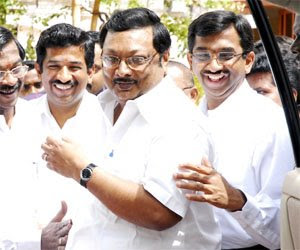 CHENNAI: The tussle between the Maran brothers and Chief Minister M Karunanidhi worsened further on Saturday.
The provocation this time was the alleged prevention of screening of Maran brothers-owned Sun Pictures’ movie Kathalil Vizhunthen in the southern districts on Friday.
Most theatre owners in these districts were reportedly warned by DMK men not to screen the movie on the opening day on Friday.

The war of words between the two families began on Saturday with Karunanidhi making an oblique reference to Sun Pictures’ movie at a film function in the city by saying that he had never obstructed the release of films, even those which expressed views opposing him.

In its news bulletin on Friday, Sun TV narrated the difficulties faced by Sun Pictures in releasing Kathalil Vizhunthen, while Tamil Murasu and Dinakaran, the Tamil dailies owned by Maran brothers, gave wide coverage, accusing the DMK Government of playing spoilsport in the issue.
Sun Network also lodged a complaint with the Home Secretary on Friday, stating that supporters of Azhagiri were intimidating theatre owners against screening the movie.
The State Government reacted on Saturday by issuing a statement denying the allegation of Sun Pictures that the release of their film was stalled in Madurai.

The statement said distributors and theatre owners had the right to screen any movie which fulfilled Censor Board certification norms.
“Some persons were leveling unnecessary charges out of selfish motives,” it added.
Within a few hours, Sun Network fired their salvo charging the government with distancing itself from the whole issue.
“Allowing persons to obstruct films produced by those who had fallen out of their (DMK first family’s) favour will only set a bad precedent,” Sun Network said.
Earlier, Azhagiri dashed off a legal notice to Sun Network stating that his image was tarnished by allegations levelled against him in the screening of Sun Pictures’ movie.
Posted by N.THYAGARAJAN at 11:02 PM No comments: 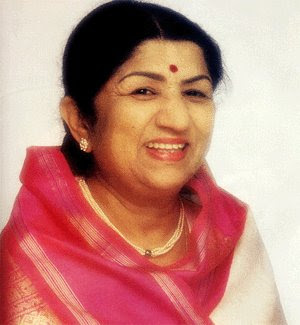 World's most revered singer Melody Queen Lata Mangeshkar who mesmerised music lovers with her celestial voice for over 60 years celebrated her 79th birthday with her family members in her Pune home.

Didi as she is fondly called by family,fans and admirers is never in Mumbai on her birthday. She stays put in her Kolhapur or Pune residence.

She was last heard in Vikram Bhatt's 1920 where she shared playback credits with Pandit Jasraj and Asha Bhosale.

On her 75th birthday, Lata was in Mumbai as her nephew Adinath had organised a concert where other singers sang her classic songs. The function was attended by Sharad Pawar, L K Advani among others.

Lata's brother Pandit Hridaynath Mangeshkar organised a musical concert Didi ani mi (Didi and I) at the Bal Gandharva Rang Mandir in Pune in her honour.

The legendary singer was introduced to intricacies of classical music by her father master Dinanath Mangeshkar.

After his demise, the entire responsibility of looking after the family fell on her and at the age of 13 she was compelled to don the greasepaint and act.

She did a few Marathi films like Pahili Mangalagaur, Majhe Bal, Gaja Bhau and even few Hindi movies like Badi Maa, Jeevan Yatra and Samudra Mandir.

Though her playback career started in 1942, she was leaving her first tentative footprints on a music scene dominated by the legendary Shamshad Begum and Noorjehan. it was in 1948 that her career graph took giant leaps with films like Mahal, Baiju bawra, Nagin, Madhumati among others.
Posted by N.THYAGARAJAN at 4:41 AM No comments: