The Oshiwara police, probing the suicide case of south Indian film actor Kunal Singh, said the actor's proximity to a co-star had not gone down well with his family. The actor had slashed his wrists few months back, according to medical certificates.

Senior officials said they are now probing if Singh had an altercation with anyone on Wednesday night, which may have led him to end his life.

Singh was found hanging from the ceiling fan by upcoming actor Lavina Bhatia. Lavina told the police that she had gone to the bathroom for ten minutes, which is when Singh allegedly took the drastic step. Speaking to TOI on Friday, Lavina said the incident had left her severely traumatised.

According to the police, Singh's wife, Anuradha, was aware about his proximity to a co-star and there were frequent arguments after which she would go to her maternal home at Ahmednagar. When TOI telephoned Singh's father on Friday, a relative switched off the phone.

Meanwhile, the police are trying to establish the exact sequence of events which led to the suicide. Officials said Singh had carried a large suitcase and placed it on a chair, before climbing on it.

He used the bedsheet from the double bed to tie a noose. Only a few hours earlier, scriptwriters and costume designers from the under-production film 'Yogi' had visited his apartment, alongwith Lavina, for discussions. They have given their statements to the police.

On Friday, Singh's family conducted his last rites at Ahmednagar.
Posted by N.THYAGARAJAN at 6:25 PM No comments:

NAVJYOT SIDHU IN A PUNJABI FILM 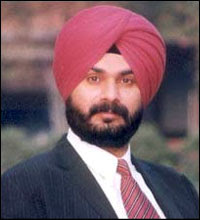 After storming the cricket and television world with his wise cracks and ever charming talk, how can Navjyot Singh Sidhu refrain from being lured by the silver screen.

The commentator turned TV host has now donned a new hat. Sidhu is all set to debut in a film titled Mera Pind. When we spoke to him the ever enthusiastic star was all excited about the film. He reveals,“We begin shooting in five days. The film is being directed by none other than Yash Chopra’s former assistant Manmohan Singh. The entire film will be shot in Punjab.”

And what will this film be all about? “The film is about an NRI who transforms an entire village and transforms their attitude.”

Transforming an entire village well that won’t be too difficult for Sidhu, knowing his gift of the gab.. The right man for the right job, what say?
Posted by N.THYAGARAJAN at 4:45 AM No comments: 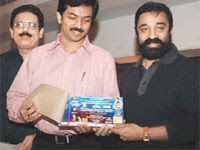 Actor Kamal Hassan has appealed to the general public to come forward and save the lives of the poor children affected by heart diseases with generous mind. The actor who as brand ambassador of the World Malayalis Association, spoke at a function organised recently said that the Association would be performing heart operations to 125 poor children at a cost of Rs.15 crores. He lauded the Malayalis Association for raising such huge funds with the interest in the welfare of the poor children affected by the heart-borne diseases.

Kamal recalled that his Fans Association functioned as Welfare Association suffered a lot for the last five years to raise the funds to perform the heart operations to 19 poor children. He said that he knew and aware better about the difficulties involved in raising funds for the welfare of the poor people.

Kamal said, that there would be fund-raiser music programme on the coming 24th in which the various playback singers of Tamil, Malayalam, Telugu and other languages had agreed to give their valuable support by singing in the programme. The music programme would be inaugurated by the music maestro Ilaiyaraja.

Hence, he again appealed to all, to come forward to donate liberally and lit the lamps in the lives of the poor children who suffered by heart diseases.

Kamal said, that one might wonder about his participation in the Malayalis Welfare programme. He said that his aim to help for the poor children coincides with that of the Malayalis Association's welfare programme. Kamal called himself as a Malayali pointing out that he had done a lot of roles in Malayalam films. He also called himself an artiste who had no barriers for language, caste or creed.

He felt proud to participate in the welfare programme and said that the credit goes to this Tamil Nadu and every individual of the Tamils.

Kamal received two donation cheques of Rs.25 lakhs from Lal Jose of Malayala Manorama and another cheque of Rs.one lakh from Samson of Polaris Software Lmited.
Posted by N.THYAGARAJAN at 8:42 PM No comments: 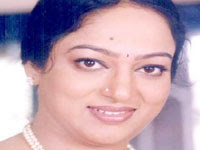 "Do you know why the music director Deva still exists in the film world with fame and honour. Because he is a grateful man who could acknowledge all for his existence in the cine field. In cine field one could find a handsome of people alone recognize the help of others. Deva is the one, who is always grateful to me. You could have heard in his speech, that it was I who had introduced him in films for Music Direction. This gives me happiness and makes me to honour the gentle man forever" said actress Nalini in a function which was accorded to the music director Deva
Posted by N.THYAGARAJAN at 8:34 PM No comments: