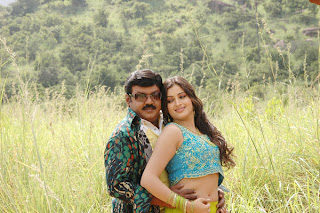 The audio release of the Vijayakanth’s 150th film Arasangam started since this morning in various states. The sales of the audio began on a happy note in Chennai, Pudhuchery, Mumbai and Delhi at 9.30 AM. Vijaykanth’s political party, DMDK people took interest in the sale of the film’s CDs. It is hoped that the film will head for super hit due to some sentiments attached to it. Every 25th film of the actor Vijayakanth proved success so far and this film being the 7th 25th of the actor, it is expected that the film is going to make out a history of record collection. The sales target of the films audio CDs are aimed at more than the sales of the Rajnikanth’s Sivaji film. Madhesh has directed Arasangam was produced by L.K.Satish and the film is likely to be released on April 11.
Posted by N.THYAGARAJAN at 4:52 AM No comments:

IN THOZHA THEY ARE FRIENDS 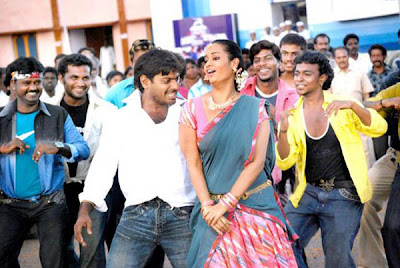 Those who played cricket in Chennai- 600 028 film now adore serious roles in the film Thozha being directed by Sundareswaran for Aravano Films. Nitin Satya, Premji Amaran, Ajay Raj, Vijay , Sahitya, Jenifer, Lakshana, and Sowmya are acting in the film. The film story tells that friendship alone is great than love. The songs in the film like Annakili, Kadhal Devadhai and Oru Nayagan Uruvagiran Thozha will create impact in the minds of the viewers. The songs of the film are the plus point of the film, besides the story-line. The director is happy that there had been tremendous amount of welcome for the film’s songs.
Posted by N.THYAGARAJAN at 4:51 AM No comments:

"I am doing glamour role in Silandhi" Monica 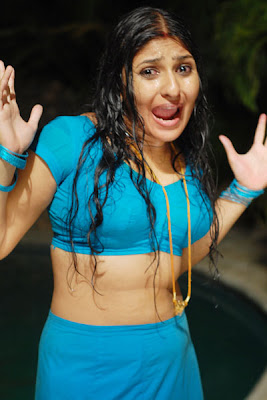 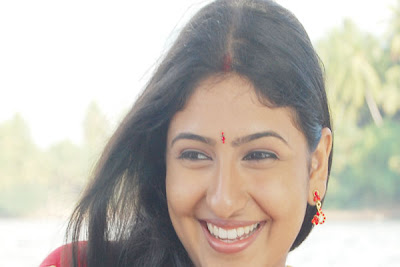 After the release of the Azhagi, Monica was given the title of “Angel”. Though she appeared in a small role in the film, her beautiful appearance has rewarded her good name. Some of the fans of the actress have started Fans Club for her. Now, they are going to launch a website in her name. In an interview to the Southernblaze she talks to our reporter.


Q: After you have won the title of Angel through the film Azhagi why you have not seen quite a long time in films?

A: Though I have won the title Angel in that film, I did the younger role of Nanditha Das. Hence, after the film was released I was asked to do the role of second heroine. But before accepting those I offers, I was invited to act in Telugu films.

Q; Have you done the role of heroine in Telugu?

A: Yes. I acted in Sivarama Rajasri and E.V. Sathyanarayana films. Other than this I acted in other two films. I did glamour role. That has fetched me good name.

Q: The surprise thing is that you have acted with Vadivelu for Imsai Arasan?

A: As far this film is concerned; I did not see who all the other actors with me are. I accepted the role, because it is Director Shankar’s movie. As expected the film got me a good name and it was a successful film in India and in London. On seeing the film many started Fans Club for me. Now, they are going to make out website in my name, and recently I came to know that the work of the site is in full swing and will be launched in the near future.

Q: Even after these successes you could not appear as heroine?

A: I think I belong to the Tamil Nadu, that is the main reason. Second, it was due to some actresses who hail from Mumbai. There is a general expectation, that the heroine should not speak Tamil properly and that may also another reason why I have not received recognition.

Q: What is the reason for appearing in glamour role in Silandhi?

A: When I feel happiness that I have acted in Azhagi film. But at the same time I feel sorry for having acted as an angel in the film. Many advertisement companies asking me to appear in sarees as if angels. This type of role may not be required for the films that are
produced now. That is the one of the reasons I am not able to get chances in films. Though I have acted in glamour roles in Telugu, I have done most glamorus role in Silandhi. Appearing in glamorous role is not a bad one. It is a part and parcel of acting.

Q: You could have done roles in the family subjects as house wife like Sneha?

A: She is also appearing in glamour roles. Still she is acting in some Telugu films in glamour.

Q: How do you choose films for your acting?

A: I am not coming from rich family to choose my character. I am from the Middle Income Group family. I always choose the story part of it and my character in the story. I expect if I do a role it should fetch me good name. Money is secondary for me.

Q: Do you have any interest other than acting?

A: I have desire in music. I want to sing and do music direction. Hence, I am going to start to learn music.

Q: Are you acting in any other films?

I am acting in a Tamil film Varnam and in a Sinhala film. The shooting of the both the films are going on.
Posted by N.THYAGARAJAN at 11:37 PM No comments: 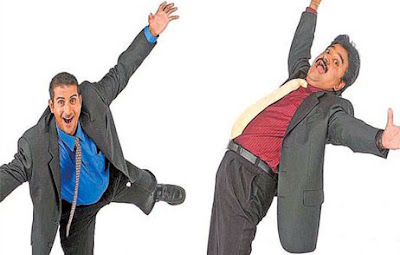 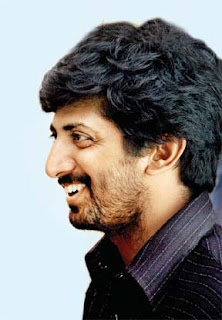 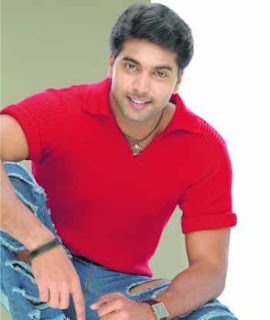 Famous Indian Cricket Player Sadagopan Ramesh is acting in the Santosh Subramaniam produced by Kalpathi Agoram. Jayam fame brothers Ravi and Raja who are acting and directing the film respectively, has assigned the acting job to Sadagopan Ramesh of the Indian Cricket Team. Earlier Sadagopan Ramesh was doing programme for Kalakka Povadhu Yaru with film comedian and producer R.Pandiya Rajan. Santosh Subramaniam is the remake of the Telugu super hit film Bommarilu. Genelia is the heroine and Prakash Raj is doing the father role for Jayam Ravi.
Posted by N.THYAGARAJAN at 8:20 PM 1 comment: 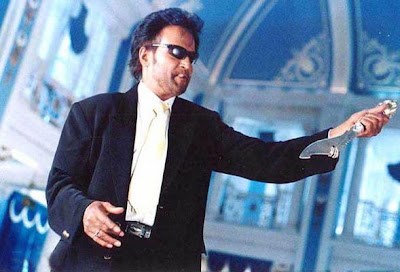 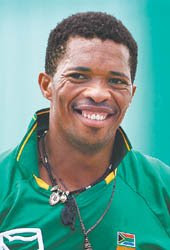 South Africa's Fast Bowler Nittany is the fan of Super Star Rajinikanth. This he revealed recently in Chennai with the dialogues of the Super Star in Shivaji film. He tells everyone that he had been a fan of Rajinikanth and tells the Tamil dialogue "Chumma Adhirudhullae". He said he had watched Rajini's Baba and Sivaji on several occasions. He had learnt the meaning of the dialogue from some Tamil speaking people. He used to do the actions just as the Super Star did in Shivaji with his fingers for the dialogue. This shows that the Super Star has attracted the cricket players of foreign countries.
Posted by N.THYAGARAJAN at 6:46 PM No comments:

The unexpected, unusual and non-seasonal incessant rains in various parts of the Tamil Nadu and Kerala have created a loss of Rs.10 crore to producers of Malayalam and Tamil films.

The rain which started down pouring for the last four to five days has destroyed the costliest sets that were made for the Malayalam films. Similarly, some cine theaters in Alleppey, Ernakulam, Calicut cancelled the night shows.

In Cannanore a set made at a cost of Rs.50 lakhs for the film Pazhasi Raja was destroyed. Mamooty is acting in the film. Similarly, a set near Adhirapalli water falls in Kerala was destroyed. The set was made for the Kala Bhavan's Swarnam film. Similarly, the sets of Jaya Suriya's Shakespeare M.A and Prithvee Raj's One Way Ticket films were also destroyed. The sets of Twenty-Twenty produced by the Kerala Actors' Association was destroyed and the shootings of all these films were cancelled. The actors and actresses who act in these films have been allotted rooms in costliest hotels who without any work spending their time lavishly costing much to the producers.

A LOSS TO TAMIL FILMS

The total loss has been estimated at Rs. 10 crore and the Malayalam film industry alone suffered a heavy loss.
Posted by N.THYAGARAJAN at 6:10 PM No comments: 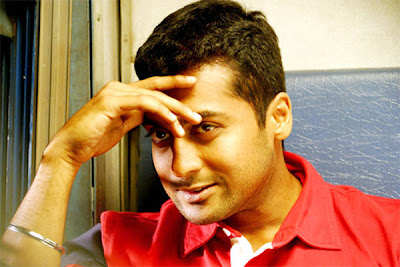 Actor Suriya who was at the AVM studios for the subamuhurat function of the Ayan film expressed concern to see that there were not enough increase in the story writers films, while he pointed out that there were a number of technicians,directors and artistes. He said that in the Ayan film he would be appearing in different get up and he did not like to divulge about it then.

Cinematographer K.V.Anand is directing this new film. Tamanna act opposite Suriya and the music of the film is done by Harris Jayaraj.

Speaking at the function, Director K.V.Anand pointed out that the film's shooting would be taking place in Chennai and one need not visit Chennai. It is propose to shoot the entire film in Chennai's various places.

Anand clarified that the title Ayan is the Tamil one. He also said that the word Ayan meant that a person who possess the skills of being an independent to fight and decide himself about the things that confront him.

Producer M.Saravanan, M.S.Guhan, Tamanna were present at the function.
Posted by N.THYAGARAJAN at 10:39 PM 2 comments: