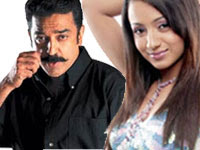 First it was Asin, then Kajol, Shriya Charan and finally the big chance of pairing up with Kamal Haasan has shored on Trisha. Talks were held between Kamal Haasan and Trisha during the last week. Now, Trisha seems to have signed an agreement for continuous 100 days. Early, she was supposed to pair up with Kamal Haasan in Dasavatharam and chance hopped into the hands of Asin.

Hema Malini was the first one to sign the agreement and she plays the negative role. Well, Padmapriya has accepted to perform a prominent role and A.R.Rahman scores music for this Rs.100Crore budgeted project produced as a joint venture of Pyramid Saimira and Raj Kamal International.
Posted by N.THYAGARAJAN at 6:22 AM No comments: 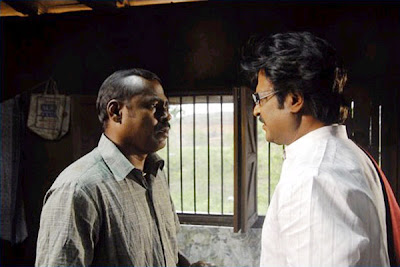 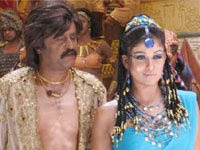 Pasupathy is a poverty stricken barber who has a dilapidated barber shop at footsteps of a hill in the Marayur. He is not able to meet the ends in spite of all his efforts. Even his children's education also comes to a standstill because of nonpayment school fees. He has also a faithful beautiful wife Meena.

At this point Superstar Ashok Kumar arrives in this village for a film shooting which would last for forty days. Pasupathy's children want their photograph taken with the superstar, since he is the child hood friend of their father. But Pasupathy feels it absurd to approach the superstar after so many years and moreover he being a self-contained man who values his dignity, he fears to approach Ashok Kumar considering his stature.

The school authorities who come to know that the superstar is the childhood friend of Pasupathy, pays the children fees. They approach Pasupathy to invite the superstar as the chief guest for the school anniversary function. Pasupathy agrees to this keeping in mind of his children education.

The ordeals that Pasupathy faces on this account are unaccountable. But when the two meet after a long gap, it is emotions that take over.

Pasupathy has really excelled as a poverty stricken barber with self-dignity but streaked with an inferiority complex. The scene when he says that "people give money for goat, sheep, fowl and ear rings but they do not give money for human being" makes one emotional. The scenes in which the efforts Pasupathy makes to meet his friend and the disappointment he encounters needs special mention. Pasupathy emotional reaction when his friend speaks about him in the school function brings tears on one's eye.

Meena's role as a dutiful wife has done justice to her role. The scene in which she refuses the Biriyani given to her by neighbor saying that, "Today you will give and my children will also get the taste. But what about tomorrow? What will I do?" makes one disconcert .

Rajnikanth entry in the film comes after 30 minutes. But the last 20 minutes is really spell bounding. The fans can get relief from punch dialogues such as, "Live and let live", "Food will be served in variety in a rich man's house but the real taste will in a poor man's house" and " If I tell the truth it makes you shiver".

Vasu has once again proved his mettle by giving a good product though borrowed.
Posted by N.THYAGARAJAN at 8:00 AM No comments: 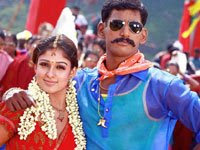 Story, screenplay and direction: A. Rajashekar

Both the brothers Vishal and Vikram Reddy had earlier churned out two consecutive hits namely Sandakozhi and Thimiru. With the same expectations, when we happen to watch this flick, its only disappointments we carry on our way back… The story is centered on the same old cop story where a honest police officer on the urge of saving society from the bad politicians is lowered down again and again. Finally does he make it big revealing the true colors of the society would be the climax…

. Satyam (Vishal), Assistant Commissioner Police, is versus the orders of the law Minister Kondal Dasan (Kota Srinivasa Rao) to polish off the ruffians in an encounter. Satyam considers that the police department is supposed to protect the law, and deal with the criminals in humanely and not as unwanted elements.

The film doesn't carry on the same line for it gets diverted when the Chief Minister of the state is prone to serious health condition. Now other cabinet ministers start indirectly expressing their wish for taking over the Chief Minister's position. Getting to observe this, Kondal Dasan insists that his henchman Dilli (Ravi Kalle) bumps of all the three cabinet ministers. On the parallel track, you find a stranger finishing off all the victims of Kondal Dasan. But things get confusing, when Dilli reveals the truth, that the ministers weren't killed by the assassin he hired.

With a great deal of mystery prevailing about who the mysterious killer is, Satyam somehow zeroes down the assassin, only to get shocked! The fact remains that the assasin is none other than ex-policeman Manickkam (Upendra) who happens to be the main inspiration for Satyam wearing the honorable Khakki uniform. What are his intentions? Has he got anything to do with revenge? Does Satyam go against him or join hands with him in accomplishing his mission forms the crux of the story….

Vishal does a good job baring his muscles and well-built body. A.Rajashekar seems to have misunderstood the fact that presenting a well-built hero, with a thick moustache is enough for a cop. Tightening his bracelet and wearing sun glasses is all Vishal does over and over again.

Nayanthara has done a lousy job, and in most of the scenes she tries imitating Jyothika especially in the song 'En Anbe'.

Upendra's performance is the only convincing aspect of the film, but the director hasn't utilized his talents suitably, throughout the film.

Kota Srinivasa Rao, Prabhu Nepal and Dilli have done justice to their roles.

Harris Jayaraj is a complete disappointment, with only one melodious song 'En Anbe' in the album. He hasn't focused well on the background score either.

R.D.Rajashekar with his camera works and Antony with his editing don't do anything much for the film either.
Posted by N.THYAGARAJAN at 7:57 AM No comments: Storyline: Abduction of school girls by baddies, Doctor's family in trouble and a police officer along with the help of a youngster eases the situation…

The film opens with Ramana eloping with his cousin girl Keerthi Chawla and on the way; he gets a call from a Doctor (Sangeetha) that she has been kidnapped by unknown group of people. Though Ramana takes it so easy, he feels the situation is serious and hands over his mobile to police officer (J.K.Ritish). Both Ramana and J.K.Ritish on the parallel lines get on with the mission of rescuing the lady and later comes to know that her husband too is a doctor (Sriman). Sriman had captured the illegal activities by a senior police officer (Anand Raj) and his brother (played by Anand Raj himself).

How the situations are simplified and the victims are rescued forms crux of the story.

Saravana Sakthi has done an excellent job with his direction and has made it a point that audiences' attention is not scattered right throughout the film.

Though after watching Cellular, we don't tend to feel that we are watching a remake and such is the stupendous crafting of story and well-designed characterizations.

Unlike his previous flick, J.K.Ritish performs well and doesn't over doe with heroism manias. Ramana, Sangeetha, Sriman and Anand Raj brim up doing justice to their roles…

On the whole, Nayagan has been churned out well and Hats off to the entire team for their spellbinding work….
Posted by N.THYAGARAJAN at 7:55 AM No comments: