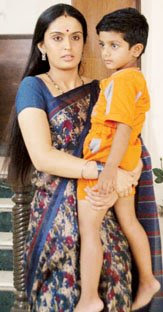 Kousalya is riding high on the crest of succcess thanks to her serials that enjoy scoring TRPs. After impressing the viewers with her performance in dual roles in MANAIVI, she has bagged two prestigious ones namely ALAIPAYUDEY in Jeya Tv Channel and DHARMAYUDAM in Mega Tv Channel.In Alaipayudey she plays the role of Kannamma married to a district collector Rajendran. She learns about the extra marital affair of her husband. The husband demands a di
Posted by N.THYAGARAJAN at 9:35 PM No comments:

DEVAYANI BACK TO MANJAL MAGIMAI IN KALAIGNAR TV CHANNEL 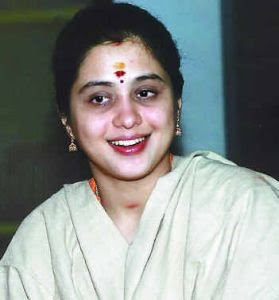 Actress devayani who took a break from her work after giving birth to he second daughter will be back to Manjal Magimai in Kalaignar Tv Channel."Iam currently busy of taking care of my two children. My daughters are wonderful gifts from God, and of course, there is an increased responsibility at home. My husband Rajakumaran is always there to help me". she says.Devayani's first step to small screen is KOLANGAL on Sun Tv and her character Abhi has become a rage in Tamil Nadu.Besides Kolangal she signed Manjal Magimai for Kalaignar Tv, but the shooting abruptly halted following her pregnancy. She did dual role Soundarya and Neeraja, who have
contrasting characters,she is now eager to continue that. Manjal Magimai will be again on Kalaignar Tv Channel from May 5th Monday Friday 7.30 Pm.
Posted by N.THYAGARAJAN at 9:16 PM No comments:

G.S.Pradeep, the famous quiz master on tamil telly has shifted loyalties from Vijay T.V to Mega T.V. He is Hosting Panchatantram, a show similiar to Grand Masters on Vijay T.V. "The show is related to general knowledge. There are three rounds in which the participants have to answer a few questions to test their knowledge. If they win all the three rounds they get to take home the prize money",says the director. Watch Panchatantram from Friday to Sunday at 7.30pm on Mega T.V.
Posted by N.THYAGARAJAN at 8:11 PM No comments: 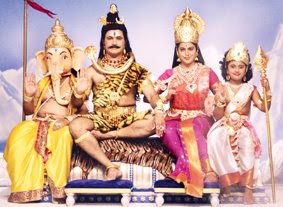 Thiruvilayadal,the mythological story from the production house Radaan has led to a lot of curiosity and discussion among television lovers even before going on air.Besides uncompromising production values and seasoned actors,the serial also has a solid technical group working round-the-clock with a determination to make it a success.
Director Rakesh Sinha with a twin success of serials Rudra Veenai and Sivamayam says he is confident of the success of the serial.Actor Prithviraj who plays the role of Indran says that it is a landmark moment in his acting career."I feel proud to act in this prestigious project. I am happy to be part of it and it will be a great hit," he says.
Radhika shares the story behind the making of Thiruvilayadal."The idea of thiruvilayadal came from suntv's kalanidhi maran.Lot of discussions and homework went into this project before going onto the sets.The responsibility was never light on my shoulders.The serial has as many as 63 stories about Lord Shiva.We have read religious and history books extensively,to get our facts right.After all,we can't take a chance about lord Shiva,"she says.Radhika who initially opted to cast fresh faces finally zeroed in on seasoned actors like Radharavi for the role of Naradhar and Manorama for Avvayiar to ensure success.
Watch Thiruvilayadal in Suntv Monday to Friday 8.00pm.
Posted by N.THYAGARAJAN at 10:38 PM No comments: