ACTRESS MEENA GETS ENGAGED-MARRIAGE ON JULY 12 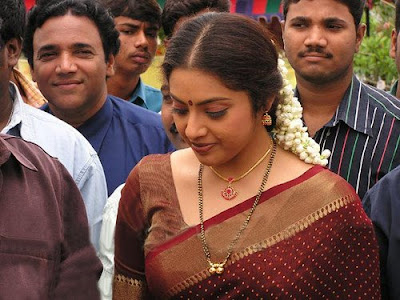 Actress Meena is getting married on July 12 at Tirupathi with a Bengaluru based Techie. Recently, the betrothel for this took place at the actress' house in Saidapet with a very few invitee to the function. Speaking to reporters, Meena said that her would-be Vidyasagar had already given permission to carry out her acting career adding that she also wished to continue in films and serials because, she earned the reputation after acting in Mariyadhai.

Incidentally Meena who is now acting in a serial Kalayanam, means Marriage, for the Sun TV Channel. Many of her fans, wanted her to get married immediately. She started to act in Tamil films as a child artiste and she acted as an orphan girl in the film Anbullah Rajinikanth. In the film, Rajinikanth used to frequent the orphanage where Meena is being brought up and in the end the orphan child dies. Exactly after a decade of this film release she acted as heroine with the Super Star Rajinikanth Muthu and Veera. She also did some films with Kamal Hassan, but Avvai Shunmugi had earned her good name.

Meena's family members were hunting for a good boy for a long time. At long last the family could able to find her a decent groom.

After marriage in Tirupathi, there is going to be grand reception for the film personalities in Chennai July 14.
Posted by N.THYAGARAJAN at 9:39 AM No comments: