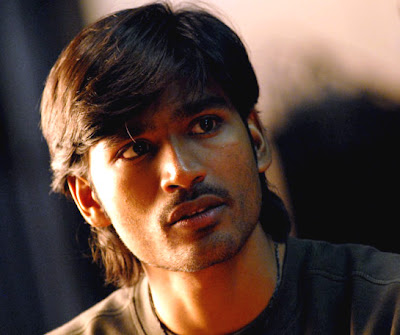 Actor Dhanush is fresh from the success of ‘Padikkadhavan’ and is juggling Mitran Jawahar’s ‘Kutty’ and Vetrimaran’s ‘Aadukalam’ currently. If he is playing the role that Allu Arjun played as the carefree lover in the Telugu superhit ‘Arya’, he is busy playing a local Madurai boy in ‘Aadukalam’.
“Characters etched like the one I have in ‘Aadukalam’ come by rarely. Typically, an actor should consider himself lucky if he gets three or even four such well defined characters in his acting career. I’m glad I got this at such an early stage in my career,” says the actor, refusing to divulge more details.
He also says it’ll be a big break for him as it will be starkly different from his other roles. “I’m not the one to play the same role all the time. ‘Polladhavan’ was so action packed and the next release of mine, ‘Yaaradi Nee Mohini’, was a complete clean family film. This will be another genre in itself,” says the actor.
Posted by N.THYAGARAJAN at 6:50 PM 1 comment: 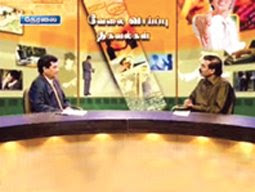 If a well qualified person does not know where to get a job for his qualification and if 'dilemma' is the force among some of those well qualified, then they need not worry over, instead they could watch Makkal TV Channel's Velaivoippu serial, an employment opportunity for the right candidate and making the qualified to have their right jobs from the right orgnisations, are some of the outcome of the show. Mind you for watching and following the advice, one need not pay any money as charges for giving valuable information. Makkal TV Channel is always looking to promote many in this way to uplift them in the society and if a regular watcher has become a top man in the society, there is no wonder that he might have watched its programmes regularly. Why you also not reap the benefit out of the channel?

Ramkumar Singaram anchors the show will be telecast on all Thursdays at 11 AM. Don't miss it, unemployed will be employed, says Makkal TV Channel.
Posted by N.THYAGARAJAN at 6:36 PM No comments:

The most popular Vasanth TV Channel will soon telecast two good films of each actors who had set the standard by their acting in those films. Important scenes from those films are to be telecast by the Channel to woo many for the show.
Posted by N.THYAGARAJAN at 6:33 PM No comments: 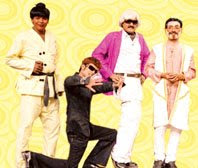 What will happen to the stories of films when continue after its climax stories? This is the theme of the Jollywood Cinema comedy show on the Jaya TV channel to be telecast on all Sundays at 10 AM. The participants of this show are look-alike actors like Shivaji Ganesan, Rajinikanth, Kamal Hassan and many other leading artistes. The films taken in this show are the films which had successfully completed its 100 days. The idea behind this show, how the story would be of these films, if they continue.
Posted by N.THYAGARAJAN at 6:28 PM No comments:

A different game show, and this could be called a comedy show too, on Sirpoli Channel by comedians Ganeshkar and Aarthi would be shown on all Saturdays. The show named Theeradha Vilayattu would various important places and would ask the public to take part in it. Ganehskar and Aarthi would make visit to big business malls, colleges and other public places and would be interviewed. The two comedians who anchor the show would ask the public to prove their skills in a comedy way. Let us watch the show on all Saturdays.
Posted by N.THYAGARAJAN at 6:23 PM No comments: