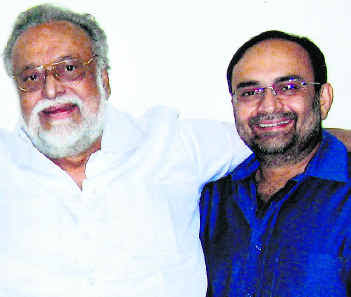 BY N.THYAGARAJAN
Chennai: Well known producer and Tamil actor K Balajee died here on Saturday evening after prolonged illness. He was 74.
Balajee, father-in-law of famous Malayalam actor Mohanlal, was admitted to Apollo Hospital last month for kidney failure. He is survived by a son and two daughters.
He has acted in over 150 films and have also produced Tamil films under Sujatha Cine Arts, most of his films were produced with the Late actor Shivaji Ganesan. Before, producing films, he had acted in various Tamil films as villain and one remarkable film was that he did the villain role in Pattanathil Bootham starring with Jai Shankar. Balaji was sometime ill and from his ill-bed he gave interview to the Jaya TV Channel for five days. Then he appealed to all the film actors to reduce their salaries, so that the film producers could not burn heavily their fingers. In the interveiw, he also narrated how a film could be made, once the adjustment of the leading artistes stop demanding a separate caravan for them. Now the late actor's son Suresh Balaji is in the production and direction. This he learnt by working with his father whenever he produced films.
It was Balaji who remade the Hindi film Qurbani into Tamil as Viduthalai with Shivaji Ganesan, Rajinikanth and Kannada idol Vishnuvardhan. Kamal who was to do a role, did not want to join in that film following which there was a misunderstanding arose between Balaji and Kamal Hassan.
AIADMK leader and former Chief Minister and also former actress Jayalalithaa and Super Star Rajinikanth visited the late actor's house and offered their condolences to the members of the beraved. On Sunday Balaji's body was taken to Besant Nagar crematorium with hundreds of film fraternities and other relatives participating in it.

Posted by N.THYAGARAJAN at 9:10 AM No comments: