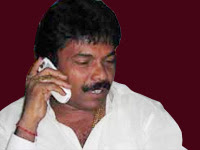 Jaguar Thangam, known for his stunts in cinema, earlier directed a film Suriya with his son, Vijay Chiranjeevi as hero. Now he is going to direct another film India in which also Chiranjeevi acts as hero. Jaguar's brother writes the story of the film.
Posted by N.THYAGARAJAN at 6:05 PM No comments: 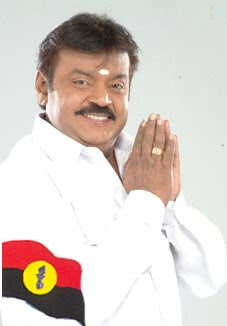 Captain Vijaykanth on Sunday at the Mariyadhai film cassette release function said, that he had done his acting for MGR's Inbamey Inba Thervandhadho song. Though he could act like MGR for the song, he didn't do that, as it would be considered that he was making fun of the Late actor who ruled the Tamil Nadu quite a long years.

As of now Vijaykanth who is running his Desiya Murpokku Dravida Kazhagam calls himself as Karuppu MGR, means Black MGR, did not like to pretend to act for the song's sequence of the film, in his Mariyadhai film.

Vijaykanth had invited all his party men for the function which took place in an open auditorium. He wanted to come over the Mariyadhai audio cassette release function, since he did not want make the function as an official or commercial view of cinema.

Mariyadhai is directed by Vikraman.
Posted by N.THYAGARAJAN at 5:21 AM No comments: