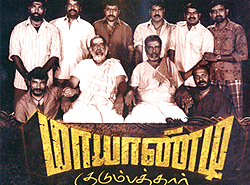 Director Rasu Madhuravan was inspired by Kamal Haasan's Dasavatharam, is now aiming at to produce a ‘perfect ten’ in his forthcoming film. .
Madhuravan, who directed Pandi recently, is all set to commence his next movie called Mayandi Kudumbathar which will see for the first time the coming together of ten acclaimed film directors.
The movie marks the debut of director Thimiru fame Tharun Gopi as the hero. Film-makers like Ravi Mariya, Pon Vannan, Raj Kapoor, Seeman, Jaganji, Manivannan among others play prominent roles in the film. Sabesh and Murali will score the music for Mayandi Kudumbathar which will go on to the floors on Friday. The who’s who of the industry are expected to take part
Posted by N.THYAGARAJAN at 8:26 PM No comments: