KAVYA MADHAVAN IS GETTING MARRIED 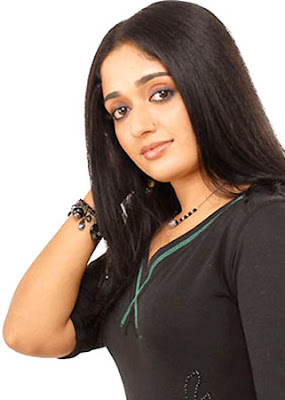 Popular Malayalam actresses Kavya Madhavan is going to get married a computer engineer named Nischal Chandra. The actress announced at a press meeting held in Kochin today. The groom is working in National Bank of Kuwait as a technical advisor. "The marriage will take placenext year as I have to complete my projects before that," she said. The groom also acted in some films as a child artiste, so Kavya need not worry about her career in acting even if she is prepared to act after her marriage.

Born in Nileshwaram in Kasargod district, the 24-year-old actress entered the Malayalam film industry as a child artist in the film "Pookkalam Varavayi" (1991). But she came into the reckoning when she played a role in acclaimed director Kamal's "Azhakiya Ravanan" in 1996.

She has acted with superstars Mammootty, Mohanlal and Jayaram. Her most successful films have been with actor Dileep. Her popular films include "Meesha Madhavan", "Madhamabhi", "Classmates" and "Ananthabhadram". Kavya said she is happy that her fiance is familiar with her profession.

Kavya won Kerala State best actress award for her role in "Perumazhakalam" in 2004.

When asked about her career after marriage, Kavya said: "I would like to sign off at the peak of my career. But it is too early to say that I won't act after marriage."
Posted by N.THYAGARAJAN at 7:47 AM No comments:

'Thala' AJITH GOES BACK TO HIS OLD CAR

Ultimate Star 'Thala' Ajith was previously driving his Benz car wherever he went. The reason is not known, why he again switched over to Honda car which he was driving before the Benz car was bought. However, there was no speed limit while he drives both the cars. It seems one of his close friends had asked him to take up the Honda.
Posted by N.THYAGARAJAN at 5:27 PM No comments:

KAMAL APPEALS ALL HIS FANS NOT TO CELEBRATE HIS BIRTHDAY 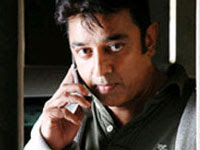 He appealed all his fans to 'redirect' their energy and enthusiasm towards human compassion on his birthday and added that "many are dying for a reason so unbelievably simple. They speak the same language Tamil, as I do. If my birthday can be used a tiny fulcrum to leverage public opinion against this genocide, apart from the honour of gaining your love, I would have one more reason to be proud of my birth".

"I am not qualified to offer solutions to the Sri Lankan problem. Nevertheless, I am sensible enough to refrain and restrain you from celebrations when our neigbours are helpless spectators to genocide and mass funerals", he added
Posted by N.THYAGARAJAN at 7:40 AM No comments:

RAJINI DID NOT SAY 'NO' TO POLITICS 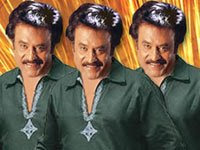 Many who have attended the Press Meet has totally misconstrued by the way the Super Star Rajinikanth answered to a question from one of his fans. When a fan asked him, to jump into the politics with the starting of a new political party, he said he just await the command of Almighty. He said without getting permission from Him, and jumping into politics when the time was not appropriate to anyone. He said, even if he does good, if the time did not suit to his actions, then everything will go waste. Hence, he said, he just did not think of entering politics as of now.
Posted by N.THYAGARAJAN at 6:57 PM No comments: 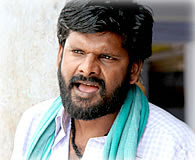 Comedian Kanja Karuppu wants to act with Kovai Sarala in a film in full role. The desire which has been pending with Karuppu, has come out when the Tamil film artistes observed a one-day fast in support of the Sri Lankan Tamils. Karuppu in a small chit wrote that he wanted to act with Kovai Sarala and passed it on to the actress. In the letter he thus stated: " Akka I want to act with you atleast in a film with full complete role. I hope you will fulfill the desire". Accepting the chit the actress gave a nod that she is prepared to act with him.
Posted by N.THYAGARAJAN at 6:52 PM No comments:

Following the SUN TV Channel, Raj TV Channel has started producing films for big screen.Now the channel is producing Kadhalna Summavaa. The shooting of the film, it is scheduled to take place only in Andhra Pradesh and a few scenes will be filmed in the Tamil Nadu.
Posted by N.THYAGARAJAN at 6:49 PM No comments:

Former Miss World Yukta Mookhy on Sunday entered into wedlock with a entrepreneur Prince Tuli here at a Gurudwara on Nagpur-Jabalpur national highway.

The marriage took place in traditional Punjabi style in presence of selected relatives and friends from both sides.

Prince is the son of Bachetar and Harminder Kaur Tuli who are into hotel, automobile, fuel, tourism businesses in India and abroad. 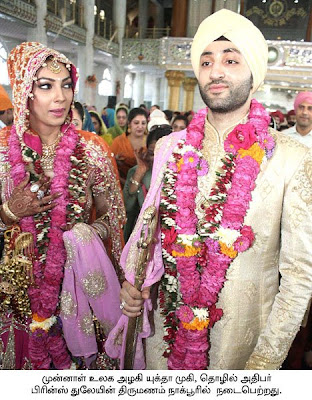 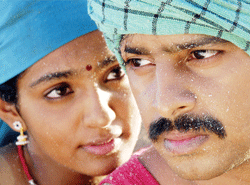 After a long gap, actor Srikanth has surfaced, a film featuring him is due for release on 21 November. The film Poo brings together Srikanth and director Sasi, who had introduced the actor to the silver screen with Rojakootam. Prominent Malayalam actress Parvathy Milton plays the heroine. Poo is based on the novel Veyilodu Poi by Suba Thamizh Selvan. Set in a rural village, the movie captures the emotions of a young couple.Sasi, who happened to read the novel, was impressed by it and immediately decided to make a movie on it.‘The novel captures the heart and soul of rustic life in Rajapalayam and will definitely give the audience a feel of having read the novel’, he says. Heaping laurels on Srikanth, Sasi says, ‘ he is a talented actor. He has immense acting potential. Unfortunately he is still searching for success. Poo has brought out his talent in acting. I share a good rapport with Srikanth and he gives exactly what I want from my artistes’.Produced by Moser Baer, the movie has been shot extensively in villages surrounding Rajapalayam and Tirunelveli.Poo is a combination of strong emotions and powerful characterisation. All the characters speak for themselves, says Sasi. ‘Every artiste has contributed his and her best to the movie. It’s a team effort and is sure to bring us rich dividends’.On Parvathy, he says, ‘she has the fire in her to excel, she has handled a matured role with ease and elan’.Visual Communication student P G Muthiah, who has had a stint under the likes of Ravi K Chandran and Ravivarman, wields the camera. Debutant S S Kumaran is being introduced as a music composer. ‘We did enough rehearsals before shooting. Almost all the artistes and technicians involved in the project are upbeat about the prospects of the movie at the box office. Combining artistic cinema with commercial elements is no easy task. Poo is a unique attempt sure to woo audience’, Sasi adds.
Posted by N.THYAGARAJAN at 7:17 AM No comments: