Abhinaya creations Mega Serial Thiruppavai being telecast in Sun Tv channel at 12.30 noon on all Mondays to Fridays is the story of a family subject. Many viewers initially thought that the serial speaks about the Love of Andal with Lord Perumal. But it is entirely different. As per the story line the Vedas do not belonged to one particular community or religion alone. People who have faith in them will reap the benefit.

The story of the Thiruppavai, Screenplay and direction are all done by J.K. Balamurugan. Manibharathi is writing the dialogues, and is produced by Radha Krishnaswamy for Abhinaya creations.

Posted by N.THYAGARAJAN at 9:06 PM No comments:

The company did not disclose any financial details of the venture, but said it would open a new revenue stream and add to its movie library.

CHENNAI: Police summoned the news editor, Mr Raja, Sun TV for an enquiry in connection with a complaint filed by a leading Tamil daily Dinamalar, accusing the channel of resorting to 'provocative' coverage.

Mr Raja was summoned for an enquiry on Tuesday night, a senior police official told PTI. The daily had filed a complaint with the state government on Tuesday, alleging that a cartoon of Prophet Mohammed carried out by the paper's Vellore edition recentl y was 'misrepresented' by the TV channel.

The daily subsequently issued an apology for publishing the cartoon. The daily's complaint has been referred to the Central Crime Branch (CCB) of the city police, which registered case under Sections 153 (provocation with an intent to cause riots) and 5 03 (criminal intimidation), they said. - PTI
Posted by N.THYAGARAJAN at 4:17 AM No comments:

CHENNAI: The Tamil Nadu government has accused the Marans-run Sun TV network of delay in providing feed to the state-owned Arasu Cable TV Corporation (ACTC) despite the latter “fulfilling all legal obligations.”

“Sun TV is spreading false information that the government officials have sought time to provide information wanted by Sun TV to give the feed” it said.

Despite providing all legal details periodically as required, Sun TV was not providing feed, it said. The state-owned multi-system operator (MSO) would cover the entire state of Tamil Nadu from September 15, the birth anniversary of DMK founder, late C N Annadurai, it said adding areas including Madurai would come under the ACTC ambit and control rooms at Coimbatore and Thanjavur had already been beaming signals in these areas.

The RCV, like any other MSO, should cooperate with ACTC, the DMK leader had said early this week.
Posted by N.THYAGARAJAN at 8:43 PM No comments:

LEKHA WASHINGTON IN A TAMIL FILM 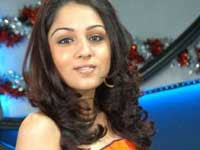 Lekha, the former VJ SS music turned Cricket commentator of Sony TV has now become the most wanted actress in Tamil. Offers are pouring in after the success of Jayam Kondan and now she is careful in selecting roles.

Though Jayam Kondan is a simple remake of Ace director Mani Rathnam's Agni Nakshathram, the film fetched rave reviews from all the corners and gave a new life to its three lead actors Vinay, Lekha Washington and Bhavana.

Lekha especially, is very happy and thinks that the film is the meaningful reply to Simbu, who had blamed her earlier for 'poor performance' in Kettavan.

Lekha had started her film career with Simbu's Kettavan, but later Simbu halted the shooting of the film for some reasons. According to Simbu, Lekha's poor performance was one of the reasons for the suspension of the shooting. But now after seeing Jayam Kondan, Simbu will be convinced about the performance of Lekha
Posted by N.THYAGARAJAN at 8:32 PM No comments: 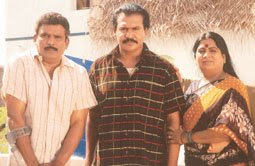 Vasantham on Sun Tv channel has recently completed 250 episodes. The serial is being appreciated by lot of viewers especially the house wives. Akila (Chandra Lakshman) fights for her husband who is in the Dubai Jail. Her husband Jeeva ( shyam Ganesh) is an accused for a murder of his friend but, he is an innocent. His friend’s death is an accident but not an murder. The dead person’s family members waiting for Jeeva’s punishment. But Akila tries to prvoe the family by entering with her child as an orphan.

She faces a lot of problems with her mother and mother-in-law.

Serial Director Rishi says in future story a new character is going to come and viewers can see twist and turns.