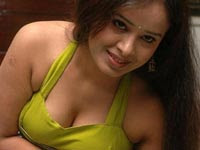 Gowri (28), an actress who appears in the popular TV serial Kolangal was arrested by the City's anti prostitution wing police last night.

According to the police, the actress was arrested while she was in the companyof some 'customers'.

Earlier the police had got information from their secret sources about the prostitution racket working in the luxurious Sujatha apartments located in the posh area of Raja Annamalaipuram, the place where some VIPs have their residences.

A team from the anti prostitution wing headed by Deputy Commissioner Vijayakumari conducted a thorough raid in the apartment late in the evening and found some girls inside the apartment. Gowri was also in that house at the time. Later all the three accepted that they were involved in prostitution

Gowri is an actress and she had appeared in Tamil films like Paravaigal Palavitham, Moondru Natkal, Kadhalukku Mariyadhai and some Telugu films as well.

She is presently acting in Kolangal. Interestingly, she is playing the role of a tough cop in the serial!

THIS IS GOING TO BE GOOD YEAR 2009 FOR ALL OF YOU
Posted by N.THYAGARAJAN at 7:10 PM No comments: