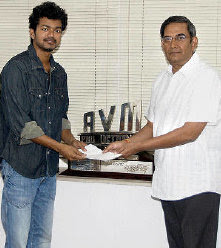 Actor Vijay, fondly called ‘Illaya Thalapathy’ by his fans, has bagged the lead role in a big budget film by AVM Productions, which is celebrating its 60th anniversary and the birth centenary of its founder A.V. Meiyappa Chettiar.

This is Vijay’s first film with the production house. AVM Balasubramanian and B. Gurunath Meiyappan will produce the film. The rest of the cast, crew and the movie’s title are expected to be finalised soon.

The script is expected to be racy, as Vijay’s fans would like it to be. Work for this AVM film is expected to start by the end of the year, after Vijay completes his current projects - ‘Kuruvi’ for Udayanidhi Stalin, directed by Dharani, and the other is said to be Ayngaran’s film to be directed by Prabhu Deva.
Posted by N.THYAGARAJAN at 9:06 PM No comments: