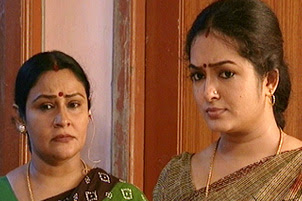 Chellamadi Nee Enakku which has crossed more than 250 episodes is now heading for its climax. One of the higly rated morning mega serials of the Sun TV Channel, and is seen by mostly house wives is finding who is the parents of Siva. Ajay in this serial does the duel role ( both the names of the duel role is Siva ) is shown as good persons. The enmity between Rajasekar ( Rao Ramesh ) and Chockalingam ( Vincent Roy ) is coming to an end with divulge of their families' secret. The story of the serial is done in a suspensful way directed by Sakthi Vel.

On contacting the Sun TV Channel and Abhinaya Creations many letters had been received asking not to stop the serial, since, many were moved by the story narration of the soap. Gayathri Priya, Mohan Ram, Bhanumathy, Abhishek, Azhagu, Sri Devi and Devi Priya are cast in good roles. It is likely the serial will be over by next week.
Posted by N.THYAGARAJAN at 6:12 AM

I have been watching Chellamadi nee enaku right from the start. Now the serial is running at 400+ episode.What is taking place in the serial is unimaginable even in wildest of wildest dreams. Dr Siva is a psychiatrist. Meena who lost her husband is right now in amnesia unable to register the loss. She considers Dr Siva as her husband because of similarities in looks. Now I don't see any kind of treatment given to her. Nobody will ever allow a third person in to their family to create disturbance. How can she see reality when Dr Siva and Parvati not attempting to make her see sense. The serial should communicate to public what should one do if they experience this in real life. The direction is totally absurd. I hope the director will bring some sense into this serial.

Can I have e-mail address of Abhinaya creations please.