Azhagu serial spins around affection of mother towards her two daughters 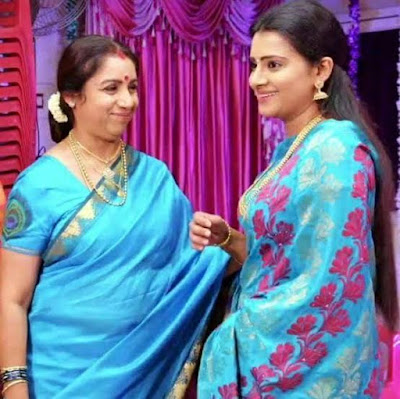 Azhagu serial which occupiesimportant place every day with numerous audience for the story-line as well for the film actress Revathy (Asha) and Thalaivasal Vijay, has an unending enmity between two sisters who were separated when both were hardly young.

People who watch the telecast of the serial every day in evenings between 6.30 pm and 7 pm, are wondering over the absence of the house which was bought not for a song but for Rupees one crore.

One can't deny simply that all the characters has no value at all, because, each and every character involves with the story and if one becomes absent on a particular day, the audience are recalling what happened to the other character on the particular day.

Poorna who envies Sudha knows that the latter is her elder sister, but did not show any courtesy or sympathy and continues to take revenge. Sudha who also knows that Poorna is her younger sister, takes lightly all that Poorna does against her. But being a sympathiser and not interested in taking severe action against Poorna, Sudha from the beginning has been very kind and also wins in all the tricky plan to attack her.
In the initial stages, the story begins from Kumbakonam exhibiting all important scenes to make the story very stronger.
When the director is going go make realize Poorna about all her evil doings against her own sister and how the story has been taken still remains a mystery. And that is the trick the story-writer employs to attract a large number of the serial viewers.

Posted by N.THYAGARAJAN at 7:18 AM