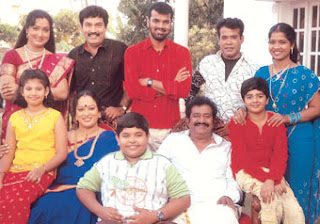 Mega TV Channel is becoming mega in its ideas with the introduction of mega serial Dhinam Dhinam Deepavali being telecast on Monday to Friday between 9.30 pm and 10.00pm. It is a story of the rulings of mother-in-law (Nalini) over her two daughters in law. The first daughter in law (Sadhana) is managing her relationship with Nalini by pretending as if she is obedient to her mother-in-law. The second daughter-in-law (Oorvambhu Lakshmi)makes a trick of creating bad blood between mother-in-law and Sadhana. Pandu is shown as the head of the family but no respect in the family. All the three in the serial are exhibited in a comedy way with a theme.

Sadhana though has become old, she appears very younger than Nalini in the serial does her experiences of acting well. To cite, the Kabadi match between mother-in-law and daughter-in-law was appealing in the last episode.

The serial is produced by Thiruvallur Kalai Koodam. Story and Direction by Ganesh Rajendran. Screen Play is done by Karthikeyan, Rajeswari and Rajendran and the dialogues of the serial is done by S.P.Karthikeyan. Lyrics by Paa.Vijay and Music by Deva and the cinematography is done by B.Suriya Prakash. Creative head is Gopalan, Gopi and P.Karthik.
Posted by N.THYAGARAJAN at 2:37 AM